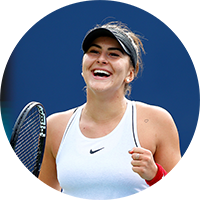 Bianca Andreescu, 2019 US Open Champion, is the Canadian tennis sensation who took the world by storm during her historic 2019 season. On January 1, 2019 her transformation began and the Mississauga native was ranked well outside of the Top 100 players, ending the year ranked No.5 in the world, capturing three WTA titles along the way. Her career-high ranking is No. 4 in the world, and she is the highest-ranked Canadian player in the WTA history.Her recipe for success has helped Bianca redesign her game plan to reach her peak performance as a Top Canadian Athlete.